Now an entertainment and shopping complex, the first business located in Lucerna Palace was a Japanese tea house. Because of the ‘geisha’ hostesses, the people of Prague believed the place to be a brothel.

During its 125 years of existence, the Lucerna Palace has housed many restaurants and cafes, but one of the first was the Yokohama Japanese Teahouse, established by the Hlouch brothers.

The brothers traveled extensively in Japan and were great admirers of the country. They first presented their teahouse at the 1908 Jubilee Exhibition of the Chamber of Commerce and Commerce at the Prague Exhibition Grounds. Their idea was so popular that they decided to move the tea room to the Lucerna building.

Today, Lucerna Palace is an integral part of the Czech capital. It would probably be hard to find anyone across the country who hasn’t heard of Lucerna. It was built 125 years ago by the grandfather of the first president of the Czech Republic, Václav Havel.

Originally, he planned to build an ice hockey and winter sports stadium, but the land was too small for such a huge project, so he decided to build Lucerna. Construction took place over 14 years between 1907 and 1921, covering the entirety of the First World War.

The concept of the Japanese teahouse caught the attention of promoter Václav Havel, and he offered the Hlouch brothers the space to start their business.

In 1909, Czech World magazine featured the teahouse, encouraging Prague residents to descend into the “Lucerne underground”.

“Like a colorful lantern, the colors of the Orient shine,” the magazine continues, “girls in fiery dresses pass by. Would you like a cup of tea tonight? Escape for a moment from the peaceful flow of Czech life?

The “geishas” in the teahouse were Czech girls dressed in Japanese kimonos. The presence of geisha was suspicious to some Prague residents, who imagined the teahouse as some sort of brothel. 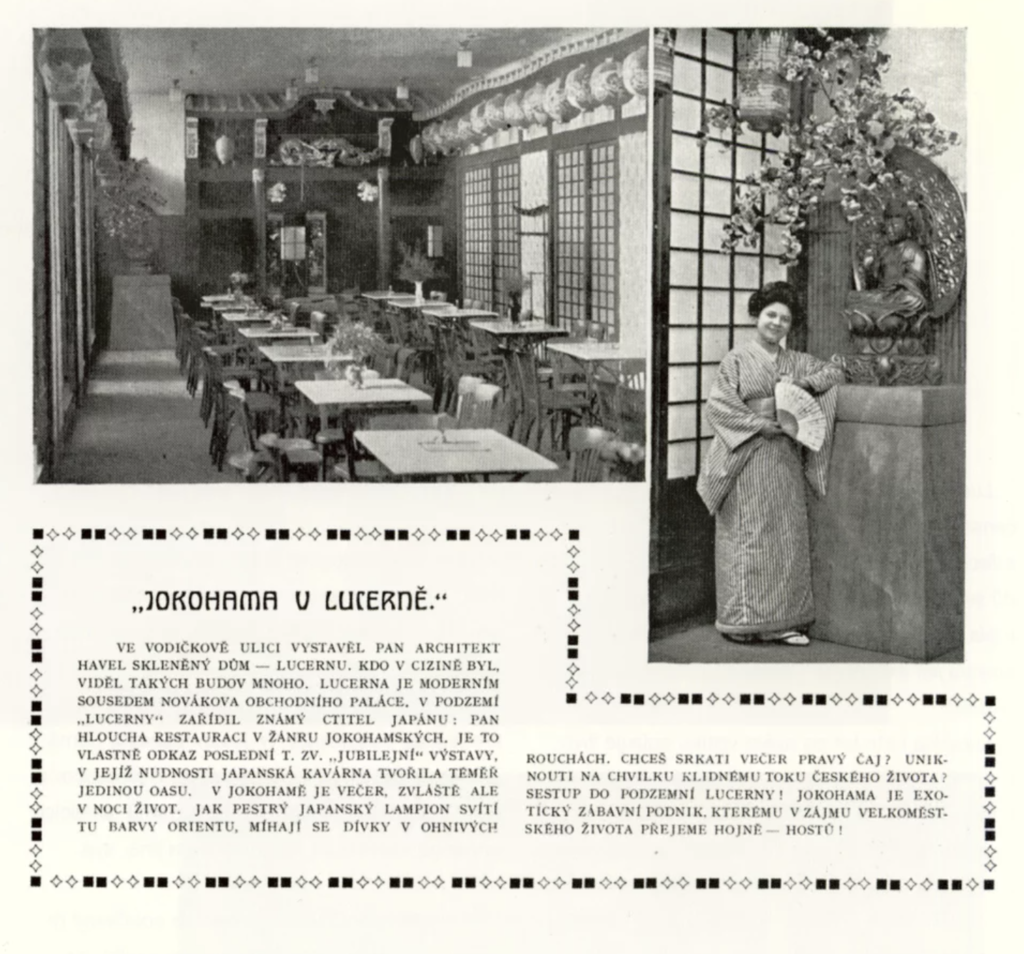 The newspapers of the time set the record straight. In 1910, the magazine Mládenec published the following: “An explanation is needed for the article on the Geisha in the last issue. By the word “geisha”, the writer meant a girl destined to serve guests. As is known, in Japan they have their own teahouses instead of our restaurants, and one of them was opened in Prague. The Yokohama Teahouse is a purely Czech establishment and we don’t know anything pejorative about it.

The business proved popular among Prague residents and enjoyed a great boom for several years. However, at the end of the 1920s, the owners encountered financial difficulties and had to close the tea house.

The Yokohama Teahouse has been replaced by the Zimní zahrada restaurant.