(If you think this week’s 4 Sale column was inspired by Neil’s Moto Guzzi tribute that aired earlier this week, you’re right).

The Moto Guzzi V85 TT made a big splash when it debuted in 2019. An old-school air/oil-cooled ADV machine, resembling the old-school desert bikes of the 1980s and 1990s? It was an oddity at that time, as all manufacturers were switching to liquid-cooled engines. Even BMW had gone water-boxing, which some had predicted as a sign of the apocalypse (and seeing how the past two years have gone, maybe they were right?).

Maybe we shouldn’t have been so surprised, though; Moto Guzzi was just replacing the Stelvio adventure tourer, which really hadn’t been out of the line for so long. In classic Guzzi fashion, it wasn’t about abandoning an original idea, it was just about taking it forward.

Dawn of the Stelvio

The original Stelvio hit the market in 2008 as a competitor to the GS range. It was more or less the same idea…or was it? Instead of a flat-twin, the Moto Guzzi came with the trademark transverse V-twin (to avoid all the shouting of “It’s a longitudinal V-twin, silly”, remember this is what Moto Guzzi themselves call this engine layout – Ed.). And, instead of pretending to travel in the desert, Moto Guzzi named their motorcycle after the legendary Stelvio Pass. Very adventurous and all, high in the Alps, but also cobbled and civilized. In fact, the exact kind of place you might expect to find a big-bore adventure bike, followed by a stop at a cafe, then a fancy restaurant for dinner. It seems that Moto Guzzi has understood its market very well.

Standard hard luggage. If you’re using this bike as a street tourer, this is the setup you want. Photo: on any motorcycle 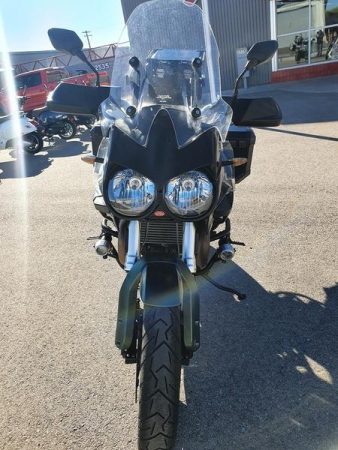 Back when manufacturers were still making wide-eyed fat bikes. Personally, I always thought the Stelvio was a looker. Photo: on any motorcycle 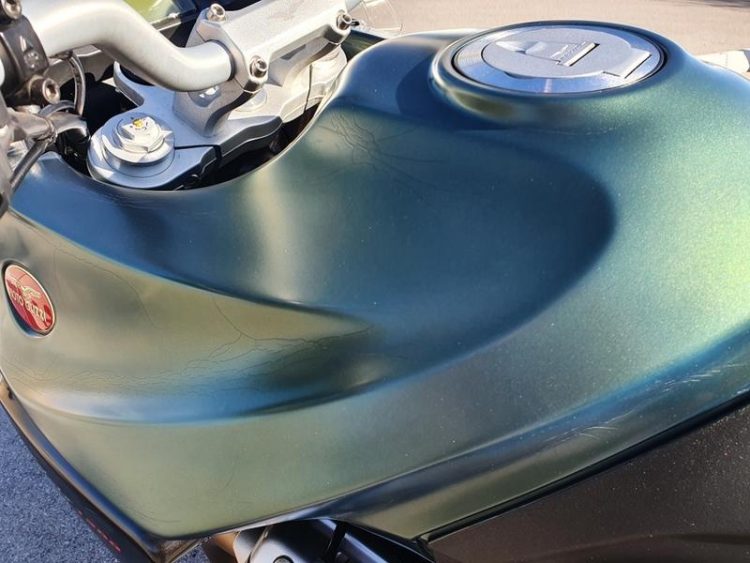 Uhhhhh, what’s up with the paint on the tank? Photo: on any motorcycle

How does it compare to the BMW competition of its time? Many specs were similar. The air/oil-cooled twin had a displacement of 1151 cc and was rated at 103 horsepower at 7250 rpm and 83 lb-ft of torque at 5800 rpm. Those numbers were slightly lower than the 2008 BMW R1200 GS, close enough that no one with a loaded bike really noticed. The Stelvio featured a six-speed gearbox and shaft drive, just like its German-made rival.

However, the Stelvio only weighed a hair under 600 lbs when fully fueled, and the R1200 GS came

in just over 500 lbs as standard (the Adventure model was still 60 lbs). Ooooh, this Italian bike seems to have been a pig, then?

Not really. It just wasn’t aimed at the same capabilities as the GS, especially the Adventure model. The Stelvio came with 19-17 wheels and Pirelli Scorpion tires; early models had spoked rims, then Moto Guzi switched to cast rims for the NTX model, then rear. 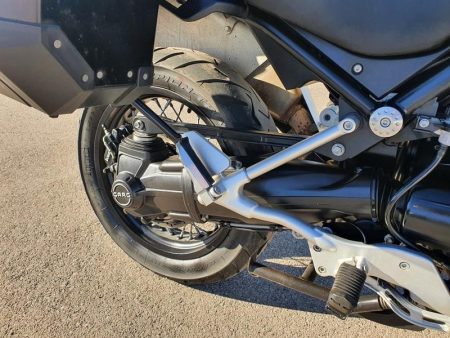 Photo: on any motorcycle 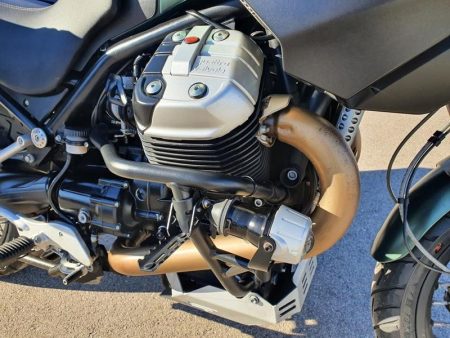 Photo: on any motorcycle

With these wheels and tyres, Moto Guzzi was telling its buyers, “Listen, you can explore off-road if you want, but it’s not an enduro, so don’t do anything too stupid.” And most buyers got the message. That said, when I was involved with the Fundy Adventure Rally, a longtime participant showed up on a Stelvio every year and absolutely whipped it. Eventually it moved on to something more sensible (and boring), and I saw this Stelvio in the classifieds after that. I, uh, avoided; I knew what that bike had been through.

So why buy a Stelvio?

Like all Moto Guzzi’s, the Stelvio had a reputation for being a good all-around bike to cover long miles in comfort, with a very nice engine. And, at least in its early years, some riders thought it was a bit simpler than a BMW, so easy to work with. And some riders just didn’t want BMWs. The Stelvio had a pretty decent production run, selling from 2008 to 2016, and during those years there wasn’t as much competition in the big-bore ADV market. No doubt it also helped sell some Stelvio.

In 2009, here is what Original review from Motorcycle.com noted:

The Stelvio 1200 NTX is a well-equipped tourer with large, strong saddlebags and ABS fitted as standard. All of the extras available on the NTX cost around 1,000 euros (US$1,400) more than a standard Stelvio. Both versions get the 2009 second-generation Quattro Valvole engine, though, but the extra protection and those sexy aluminum saddlebags are worth it. The air-cooled 1151cc V90 is a gem and makes for a relaxed yet still sporty touring experience just the way you like it. The extra torque was welcome in the high alpine passes.

However, even though the bike ran perfectly, there were some annoying issues for some owners. From my friend Steve Bond’s review of the NTX model in 2012 (RIP, Bondo):

The Stelvio has so much potential to be an adventure grand tourer, but the boys of Valpolicella better get back to the drawing board because, while the basic platform is great, the details are somewhat lacking.

The adjustable traction control is nice (and both it and the traction control can be turned off if you’re brave enough to venture far from the pavement), but deciphering how to adjust it is like translating the Dead Sea Scrolls from the original Hebrew. . Ah, the Italians.

The Stelvio comes with a switch for the heated grips, and the wiring… and the icon that lights up on the dash showing the three heat levels you’ve chosen. But, while headlamps are standard on the NTX pack, the heated grips themselves are optional. Ask potential owners what they would rather have as standard – superfluous lights or warm hands. Ah, the Italians.

The instrument cluster is excellent, the speedometer and tachometer are easy to read and there is plenty of additional information on fuel consumption, average and maximum speeds etc. But when you reset one of these functions (like average fuel economy), everything else will also return to zero. Ah, the Italians.

Ah, the Italians indeed. Their bikes look good, they’re fun to ride, but you can still expect quirky features and handling. If you’re thinking of buying a Stelvio, keep this in mind. At least ADVrider has a very strong thread on the Stelvio in the forums, and if you run into any annoying duds, you should be able to find answers there. 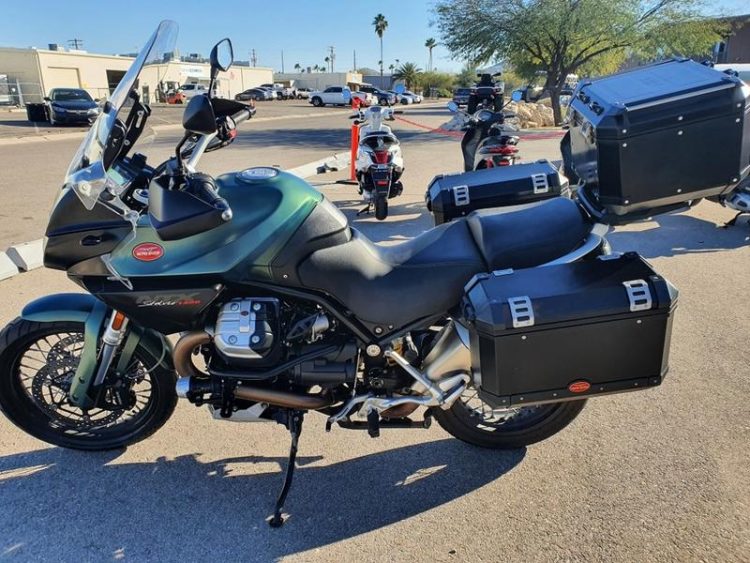 Aside from the paint issues and some crusting on the headers, it’s a pretty decent machine. It’s worth $10,000, though? It’s up to you. Photo: on any motorcycle

Is this a fair price? Shop around, and you might do better, but this bike looks clean, and we’re in the midst of COVID-nomics. It certainly doesn’t sound like a screaming deal, but what is it, these days? If you want to call the store and haggle a bit, the website is here.